To all whom it may concern:

Be it known that I, KARL ALBERT JAKOBSON, a subject of the King of Sweden and Norway, residing at Karl XII Gade, 3, Christiania, Norway, have invented a certain new and useful Improvement in Gas-Motors, of which the following is a specification.

My invention relates to gas engines or motors whereby I not only simplify their construction and economize the consumption of gas, but effect the mixture of gas and air before their entrance into. the cylinder in a safe, complete and simple manner and secure the regulation of power of the machine by means of a simple arrangement of governor.

Referring to the drawings which form apart of this specification Figure 1 is a side elevation of a gas motor constructed according to my invention. Fig. 2 is a plan of the same partly in section. Figs. 3 and at are face and edge views respectively of the wheel which carries the cams or eccentrics. 1s a side view partlyin section of the valve box or casing. Fig. 6 is a plan of the same. Fig. 7 isa side elevation of the governor. Fig. 8 is a section of part of the ignition chamber showing the ignition tube. Figs. '5 to 8 are drawn to a larger scale than Figs. 1 to 4. I On standards a d (Figs. 1 and 2) isa frame 0 b and cylinder 0 connected by screws passed through flanges b c. The cylinder 0, provided with a water-jacket c is continued as shown at c in Fig. 2, into the frame I); d is the piston provided with springs 01 and with a pivot d ,'to which is connected the connecting rod e, which through thecrank f on the shaft f operates the piston 61 up and down.

The actuation of the engine iseffected by the following arrangement: g is a pinion, se- 40 cured to the crank sh'af t f and serving to actuate a toothed wheel h. This toothed wheel 71. rotates on a spindle t' at half the speed of the pinion g. To the toothed wheel h are fixed three cams or eccentrics h k h (Figs.

5 1, 2, 3 and 4.). The cam h placed on the inner side of the toothed wheel h, operates at a certain point of the rotation on a roller 70', which by a pivot is fixed to the vrod k and forces the latterto slide in bearings Z Z The other end of the rod is is provided with a fork, to which is attached a lever 70 connect- Fig. 5

ed to the governor of the engine, and when the latter is running at a normal speed acts upon the valve rod m of the valve m. By this means the valve is opened and admits gas from the passage n (Figs. 1, 5 and 6). This gas is now mixed with air, which on account of the vacuum in the cylinder 0 enters from the standard a through a tube 0, passes in finely divided streams through the passages o and meets the gas coming through the valve m, with which it becomes intimately mixed, and further, on account of the vacuum,

streams through the valve 10 and passage 10 into the cylinder 0, which is thereby filled. The piston d which is then in the position shown in Fig. 2 moves inward the valves m and 19 close (the eccentric h" having passed the roller lc) the compresson begins and the mixture is now forced into the ignition chamber q (Figs. 1,- 2 and 8) until the piston reaches its innermost position,when as in the usual way the explosion takes place, and forces the piston outward. When the piston again returns, the exhaust which is performed in the following manner commences. side of the tooth-wheel h opposite that on which the cam h is situated is a cam h (Fig. 4). Ata certain period of rotation of the toothed wheel h (when the explosion in the cylinder has takenplace) the cam 7 presses against a roller 0* on a rod 4' which by this means similarly to the rod is, is caused to slide in the bearings Z Z and with its other end acts upon a valve rod 3 and valves; the latter is opened, and when nowthe piston d returns after the explosion, the exhaust gasis forced out through the passage 19', valve 5 and. tube 5 into the exhaust receiver 8 until the plunger again moves back when a vacuum again takes place in the cylinder, and gas and air are again introduced as here inbefore described and compressed for a fresh explosion. The valve rods m and s are provided with spiral springs m and s which keep the valves m and 8 closed, when the rods k and r are not acted upon by the cams h andh' r is a rod arranged to-be rotated in bearings on the rod 7' and at one end furnished with a handle r the other end which 'is angular being adapted to catch in agroove in the roller r. The roller r can by the rod Onthe' r be moved somewhat aside on its pivot so that the cam h (Fig. 4) which projects less than 7L2 can as the toothed wheel h rotates, be caused to press upon the roller r and slightly open the valve 5' by which the compression may be diminished at starting. A further advantage of thisarrangement is, that in starting by hand engines having two or more cylinders only the resistance due to the compression 1n one cylinder is to be overcome the arrangement of the pressure releasing mechanism hereinbefore described upon the other cylinder opening the valve 8' so that no compression takes place. The first cylinder can thus start the others. 25 (Figs. 1 and 5) is an adjustable collar secured by a screw on the valve-rod p on the valve 19. On this collar t is placed an india-rubber ring 15' in order to deaden the noise caused by contact of the valve with the casing and by which collar the stroke of the valve 12 is regulated.

'u/ and U2 are two guide-boxes for the rods 8 and 772; they are furnished with openings which correspond with the passages 01 and The ignition tube (1 in the ignition chamber q is (as shown in Fig. 8) furnished with a conical screw thread while the opening into which the tube is screwed, is cylindrically threaded, by which means the tube can more easily be freed, when it has been burned fast to the chamber after use for a long time.

The governor of the motor is illustrated in Figs. 1 and 7. The standard 7) of the governor rests on the bearing Z and has three arms 41, c 12 in the form of tubes or sleeves. In the sleeves 'v and o revolves a hollow spindle w on which a pulley w is keyed.

This pulley w actuates the spindle w by a cord passing over a pulley 72 on the toothed wheel h and pulleys v 0 on the standard t (Fig. 1); the spindle to has at the top two regulating balls 10 10 suspended as usual by arms 20 to which have noses w, 10 working in a groove in aplungerm which is furnished with a cap at. By the outward movement of pass under the same; the supply of gas to the machine is stopped until the speed slackens, and causes the balls w w to fall, whereby the arm is again raised by the action of springs 00 and :0 The link connecting the bar 00 and the arm k consists of two parts, viz. an inner pin or pivot y and an outer sleeve g which are connected by two spiral springs 11 g in such a manner that when the arm 70 passes under the valve rod m the link will yield in order to avoid the gas valve becoming bent.

In testimony that I claim the foregoing as my invention I have signed my name, in presence of two witnesses, this 2d day of November, 1892. 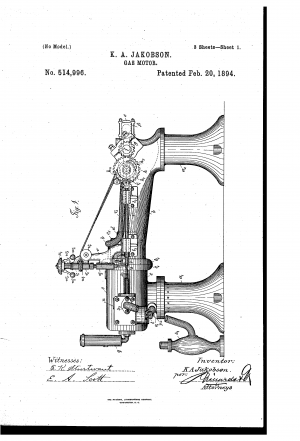 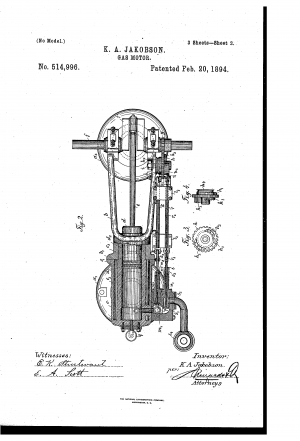 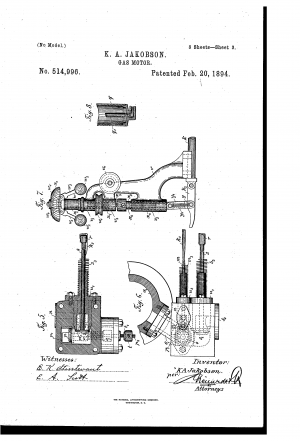